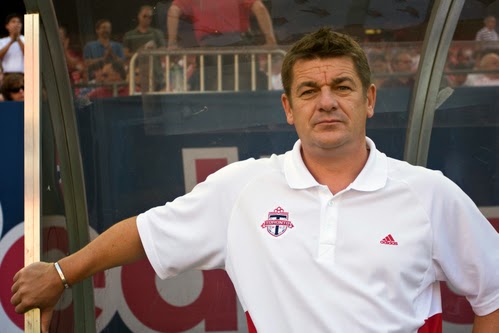 In February 2008, John Carver was named as Toronto FC's second ever head coach. Less than 7 years later, he is now the caretaker manager of Newcastle United, an English club currently in tenth position in the Barclays Premier League.


Following a disastrous expansion season that saw the Reds win 6 games out of a possible 30 and finishing 15 points behind a playoff spot and 30 points behind league winners DC United, Toronto FC hired John Carver, a native of Newcastle, England, as their second ever head coach.

Toronto would go on to finish 12th out of 14, two points ahead of the 2014 MLS Cup winners LA Galaxy, four points behind a playoff spot, and 22 points behind league winners Columbus. Carver would resign in April 2009 following a fine from Major League Soccer for criticizing the refereeing in a loss to Dallas. The vision that John Carver had for Toronto FC and despite an unsuccessful run in the league, he would give way for the like of Preki, Aron Winter, Paul Mariner, Ryan Nelsen, and current head coach Greg Vanney.

The next 7 years would show a rise for the 49-year-old Carver. From an assistant coach position at Plymouth Argyle, Carver would then join Sheffield United in 2010. In 2011, Carver returned to his hometown to become an assistant manger at Newcastle United. Four years later, he could become caretaker manager due to the departure of Alan Pardew to Crystal Palace.

To start off 2015, Newcastle would host Burnley at the famous St James Park. Despite leading 2-1 at halftime, Burnley would go on to score in the last 5 minutes to secure a 3-3 draw. Today, he suffered his first loss at the hands of Leicester City in the Third round of the FA Cup.

From Toronto FC to Newcastle United, John Carver has quite the challenge in securing a successful finish for "The Magpies". Carver's new team sits 7 points behind Tottenham United in a chase for a European spot and are 10 points ahead of Crystal Palace, a team in the relegation zone to the second-tier Championship.
Posted by Unknown at 7:52 PM