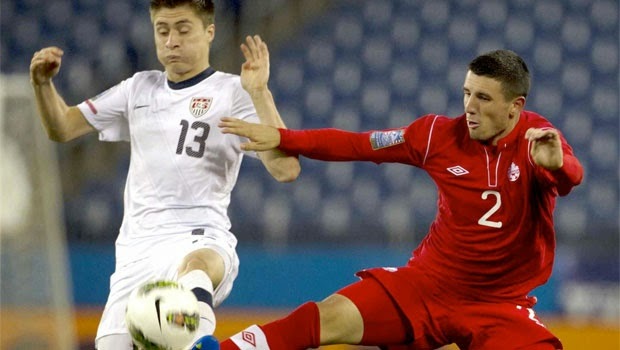 Here at TFC-Rumors, we like to highlight young Canadian players with goals to qualify Canada to their first World Cup since 1986. As strong supporters of the Canadian game, for our third installment of our #ScoutingSeries, we will be highlighting Andres Fresenga.


Biography:
Andres Fresenga is a 22 year old right back born in Toronto of Uruguayan decent. He moved to the South American country in 2007.

Club and International History:
After moving to Uruguay in 2007, Fresenga joined Club Nacional de Futbol, winning the Uruguayan under-16 Championship. The following year, he joined to Danubio FC and won the under-17 Championship. With very strong youth years, the Canadian defender joined the Racing Club de Montevideo in 2009, where he featured with the under-23 teams before signing and playing with the first team from 2010 to 2013.
He would leave Uruguay and return to Canada to trial with the Vancouver Whitecaps during the 2013 preseason. Following an unfortunate injury, Vancouver opted to pass on the player.

In 2014, NASL club Ottawa Fury signed him on a one year deal for their inaugural season. Having played 4 league games, 1 Canadian Championship game, as well as one friendly, the young defender played a total of 394 minutes.

From April to September, Fresenga was part of Ottawa’s Game Day 18 on 13 occasions. His professional club debut would come in April against Minnesota. His first start for the club would also come in April, in a 4-0 win against the Carolina Railhawks. Fresenga would go on to start two the following two of the following four games against Atlanta and San Antonio.

His sole Canadian Championship game came in April against Edmonton, a 0-0 draw. The club from Ontario would go on to lose the second leg 3-1. In July, Scottish powerhouse Rangers came to the United States and Canada on a preseason tour and Fresenga was part of the starting lineup, playin 51 minutes in a 1-0 loss.

Fresenga first rose to the international stage during the 2011 CONCACAF under-20 Championships, leading Canada to the quarter-finals before losing 3-0 to eventual champions Mexico. He first gained attention both in the United States and Canada following the 2012 CONCACAF Olympic qualifiers, where he played in two games against the United States and Mexico, a 2-0 win and 3-1 loss, respectively.

Fresenga was dubbed as the potential future right-back for the Canadian national team. In January 2013, he was called up for international friendlies against Denmark and the United States.


A big note to make is that Fresenga is available on a free transfer from Pangea Sports Management so the front office would not have to pay for a transfer since his contract from Ottawa expired last month.

*TFC-Rumors is using this #ScoutingSeries purely as a way to potentially recommend players to the club. Andrés Fresenga or any other player in our series are not rumored to join the Reds.
Posted by Unknown at 11:25 AM